Jicama is what some people call a Mexican potato.

It’s also known as the “Mexican turnip” and is used in many parts of Asia, Africa, Central America, and South America.

It has a crisp texture that some people find refreshing when eaten raw in salads or as a snack.

In this blog post, we’ll look at what the jicama is, what it’s used for, and what jicama tastes like. 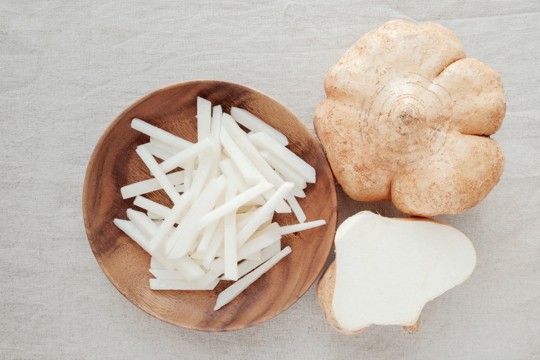 Jicama is a root vegetable that looks like an oversized potato.

It has brown skin and white flesh on the inside, which you can eat raw or cooked.

Jicama’s texture contains some fiber, providing more of a feeling of fullness than other vegetables when eaten in large quantities.

You’ll find this type of healthy food in Mexican dishes such as tacos, tostadas, and salads.

The jicama plant’s vines can be up to 20 feet in length.

The leaves and seeds are toxic, but only the root is edible.

It has tough brown skin that yields juicy white flesh after coming in contact with water.

Jicama is packed with a prebiotic called inulin and rich in Vitamin C, A, and low-calorie fiber.

You can find jicama in most supermarkets, although it’s often sold under the name ‘Mexican potato’. 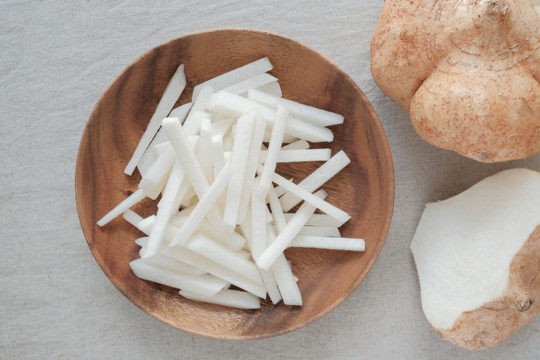 If you’re looking for a vegetable that’s low in calories and carbs, you should consider adding jicama to your diet.

Jicama is an excellent source of vitamin C and high in potassium content which can help regulate blood pressure levels and prevent muscle cramps.

It also contains many vitamins, including A, B-complex, and E.

The fiber content of jicama is also beneficial for your digestive system and keeps you feeling full longer with its low-calorie count.

It does not contain any cholesterol or sodium, making it a healthier option than many other vegetables on the market today.

Jicama also contains many minerals beneficial to your health, including calcium, magnesium, phosphorus, potassium, and iron.

If you’re looking for a quick snack or side dish that will provide those vitamins and nutrients without adding too many extra calories into your diet, then jicama is a perfect choice.

Have you ever tried jicama? This nutritious vegetable is a common ingredient in Mexican dishes.

It has a crunchy, water chestnut-like texture and can be eaten raw or cooked.

Jicama is a tuberous root with white flesh.

The inside of the jicama has few nutrients, but it tastes like a combination of pear and potato.

Jicamas can be eaten raw, and they are often used in salads to substitute for apples or pears that might otherwise be served as part of a salad course.

When cooked, jicamas turn brown and become a bit sweet.

The texture of cooked jicama is similar to cooked carrots or potatoes.

Jicama is often added to soups, sauces, and curries for its light flavor.

Why Does Your Jicama Taste Sour? 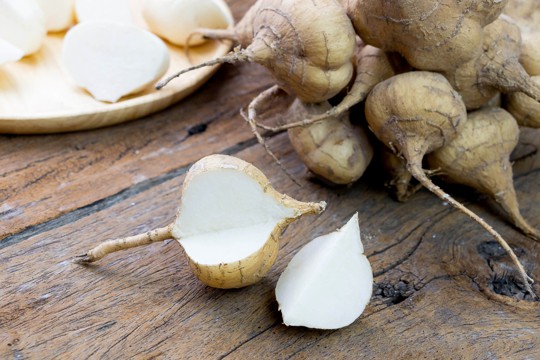 When cooking jicama, wait to add it until the final five minutes of your dish crunchy textured.

If you’re not sure if that’s safe, then taste a little piece and decide from there.

Jicamas can come with sour tastes, which aren’t an indicator of anything bad by itself- most often caused through excess sweat or improper storage in warm areas like kitchens during summer months.

Jicama wraps are made from jicamas and various other vegetables like carrots, onions, radishes, and garlic.

They also require spices such as cumin or turmeric to add flavor.

The taste of jicama wraps is similar to that of a falafel wrap or burrito.

It can also be eaten with pita bread-like hummus and tahini sandwiches.

It is also perfect for those who love to snack on vegetables and fruit.

How to Cook Jicama?

Jicama has a white interior with brown skin, and it resembles the texture of an apple.

To prepare jicama for cooking, peel off its dark outer layer with a knife.

Cut the jicama into slices or cubes, and then boil it in salted water for about ten minutes.

Jicamas can be eaten raw after being peeled with a knife; they are crunchy like an apple when served cold.

If you want to fry jicama, you can cut it into slices and then fry them in a pan with oil for about five minutes.

You could also boil jicamas like potatoes to make mashed potatoes or fries by cutting the cubes into smaller pieces.

How to Choose Jicama? 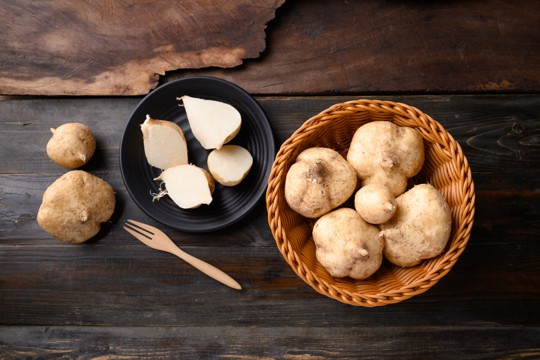 Jicama looks like a large radish or turnip and has an indistinct flavor that’s sweet and slightly nutty to many people.

It’s best to buy jicama that is firm and fresh-looking.

Jicama should also be free of soft spots, mold, or signs of decay.

The kind of shape jicama will depend on how it was grown, its variety, or if one was selected for this purpose when harvested.

The most common shapes are globular or round in appearance.

They may also have an elongated form with pointed ends, which resembles a carrot.

How to Store Jicama? 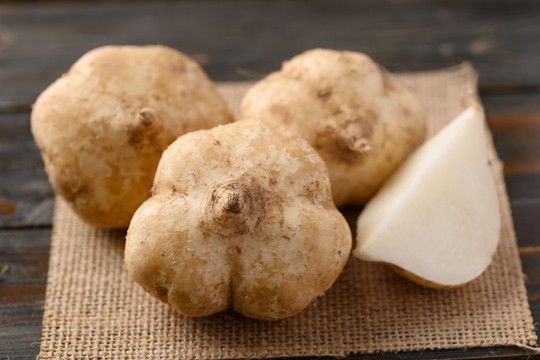 For those on the go who want to eat this delicious veggie but don’t have time for prep work, it’s best stored unpeeled in an airtight container with some moisture-absorbent material like paper towels.

This will keep your jicama fresh for up to a week.

To keep it longer, wrap the peeled jicama in wet paper towels and place them inside of an airtight container or bag before storing it away from sunlight as well.

This will help you store your jicama for up to two weeks without any significant loss in quality.

In conclusion, jicama is a vegetable that is sometimes eaten raw but tastes best when it is baked or fried.

The taste of jicama can be compared to potatoes, apples, and radishes.

Jicama has many health benefits, such as being rich in antioxidants, vitamin C, and fiber while also being low on calories, making it perfect for weight loss diets.