Pastrami is a cured beef traditionally made from the navel end of a brisket.

It is generally spiced with garlic, pepper, and coriander, smoked, then steamed to serve.

Pastrami isn’t something you’ll find in your local supermarket, but it can be found on the internet and in specialty stores.

If you want to make pastrami at home, you will need a good quality brisket from a reputable butcher.

The meat should be well marbled with fat as this helps keep the meat moist and tender during curing and smoking, and it is important to pick a good quality piece of meat.

A large brisket will provide enough pastrami for the whole family, or you can freeze some of the end slices for future use.

You can find different styles of pastrami throughout the world, made from different cuts of meat, though universally, the pastrami is sliced thin and eaten cold.

Freezing pastrami correctly will keep it fresh to be served after thawing.

In this article, we will look at how to freeze pastrami to keep its flavor and texture for later use. 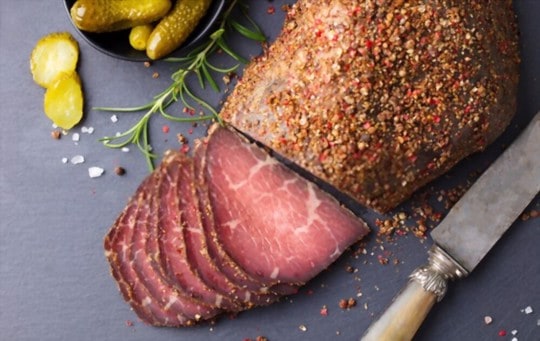 Freezing pastrami can affect its texture and flavor in the same way that freezing any other meat will.

The main reason for this is because freezing causes ice crystals to form inside the cells of the meat.

When you freeze, these ice crystals grow larger and rupture cell walls.

This rupturing releases cellular fluids which leak out of the meat and will change the texture of the meat, changing its color and flavor in the process.

How you freeze pastrami before serving determines how much the meat is affected by thawing.

Below are a few tips on how to freeze pastrami.

How to Freeze Pastrami? 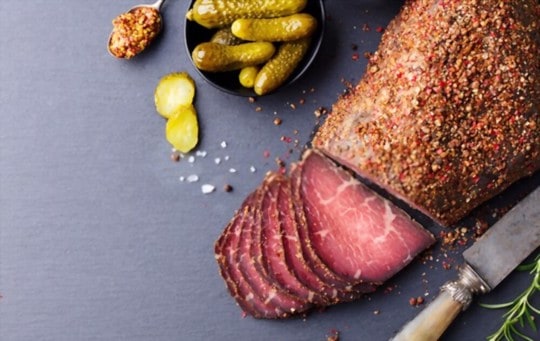 If you’re freezing pastrami, allow the meat to cool to room temperature first.

Pastrami should be frozen quickly and not allowed to thaw slowly as this may cause bacteria in the meat to grow.

Ice crystals will only form outside your meat if it is left in the freezer for too long.

ALSO READ
Can You Freeze Gruyere Cheese? The Complete Guide

You can then use a vacuum sealer or wrap the meat tightly in freezer paper before placing it into a strong, resealable plastic bag.

Before sealing the bag, remove as much air as possible by either sucking out the air with a vacuum cleaner or using your hands to push it out of the way.

It is also recommended that you write on the outside of your bag the date you plan to consume the meat and its weight before placing it back into the freezer.

If you want to prepare a large amount of pastrami that will be eaten over many months, you may have better luck freezing your beef just before smoking and then vacuum sealing and freezing the cooked pastrami at a later date.

How to Thaw Pastrami? 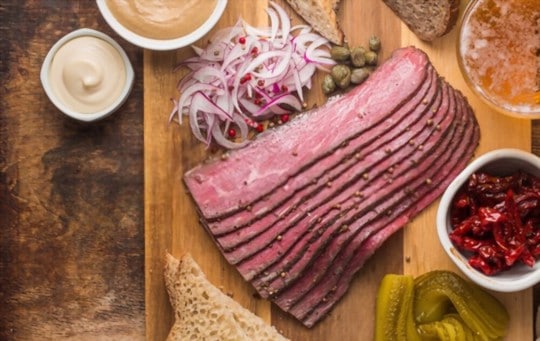 Pastrami should not be thawed quickly in water.

To thaw your pastrami, place it into the refrigerator covered with cling film and leave for a few hours or overnight.

Once pastrami is at room temperature, you can cook it on medium heat until warmed through.

If you are going to reheat it, cook it slowly as high heat will cause your pastrami to become tough and chewy.

You can also thaw pastrami in your microwave.

Wrap the pastrami loosely with a damp cloth and heat on high for 10-15 seconds at a time until thawed.

This should be done very carefully as microwaves tend to cook food unevenly, leaving some parts of the meat raw while others are overcooked and dried out.

The same process can be done in a conventional oven.

How to Use Thawed Pastrami? 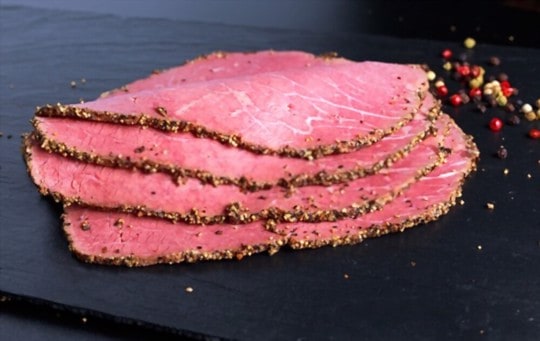 Once pastrami is cooked, it can be used in many different ways.

It makes a delicious addition to sandwiches and wraps and is very tasty, eaten on its own with some mustard or pickles.

You could also use leftover pieces of your pastrami to make hash or stew if you want an unconventional meal that goes off the beaten track.

If you end up with any pastrami that has gone off and spoiled, remember to dispose of it in the same way as you would meat from a store.

Freezing does alter the texture and flavor of pastrami but not so much that it’s entirely unusable for human consumption if frozen correctly.

Thoroughly cooking your pastrami, whether you have frozen it or not, will destroy any pathogens that might be present in the meat and remove any bacteria that has developed due to freezing.

In conclusion, the pastrami is a tasty type of cold-smoked meat that goes well on sandwiches and wraps.

If you have leftover pastrami, you can freeze it using one of the methods described in this article.

If your food has gone off and spoiled from improper freezing or storage, remember to dispose of it safely.

Keep an eye out for spoilage signs, including mold, off-putting smell, and unusual coloring.