Corned beef in the United Kingdom and Ireland is often a cheap, mass-produced food.

It is also associated with Saint Patrick’s Day, where it may be eaten on that day and served at some other times of the year as a special meal.

Many people who call it “stewed beef” or “salted beef” in the United Kingdom and Ireland do so because their ancestors immigrated from countries where it was called.

But do you know who first made corned beef?

In this article, we will discuss the history of corned beef and how it was first made.

What is Corned Beef? 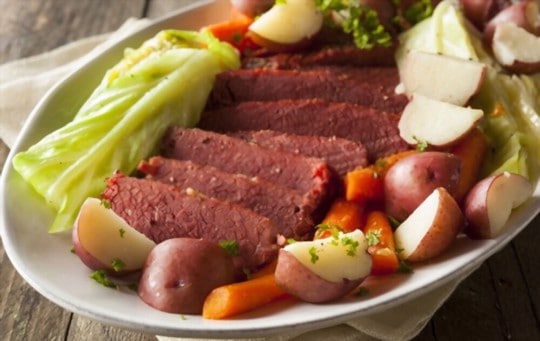 It is most often made from the less tender and leaner parts of the beef carcass: the brisket, plate (shoulder), and cheeks, known as “corned” because large grains of kosher salt was used.

It also contains small amounts of spices and brown sugar.

The meat is cured using a pickling process similar to the production of deli ham, where the salt content raises the pH level to prohibit harmful bacteria from growing.

Corned beef was historically popular in Britain because it could be stored for many months due to its high salt content, allowing otherwise wasted meat from older cattle to be eaten and transported more easily. 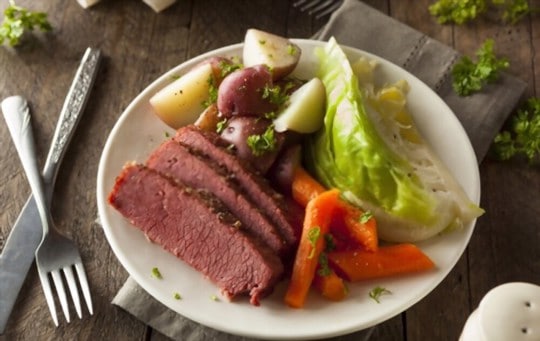 Corned beef is made by curing the meat with large grains or pellets of rock salt, sometimes mixed with other herbs and spices.

The term “corned” comes from the granular salts used to cure it.

The term corned was derived from the word corn, which referred to any small hard particles or grains.

It was once commonly referred to as “salt beef” or simply “beef”.

In the United Kingdom and Ireland, the term may refer to a wide variety of salted/cured meats – not only beef.

Where Does Corned Beef Come From?

Corned beef has been around for centuries, but did you know it wasn’t even invented in Ireland?

The first generation of Irish-Americans came to America during the Irish migration. They sought the Irish-inspired foods of their homeland.

On St. Paddy’s Day, they created a meal consisting of boiled bacon and cabbage. However, immigrants could not afford the high price of bacon and pork.

Instead, they went for the most affordable meat and cooked it with cabbage to have a traditional meal.

The first corned beef was made in New York, Manhattan’s Lower East Side, to be exact.

This neighborhood was home to millions of new immigrants from Ireland, Germany, Italy, Poland, and other countries.

The salty meat made a refreshing change from bland salted pork often eaten at the time.

The popularity of corned beef spread quickly as it was easy to produce in the neighborhood butcher shops.

The cost was also low, and it was kept for months without refrigeration. Canned corned beef became available in the 1930s.

Still, the product enjoyed its greatest popularity during World War II when meat rations from the war were distributed to families to supplement American meals. 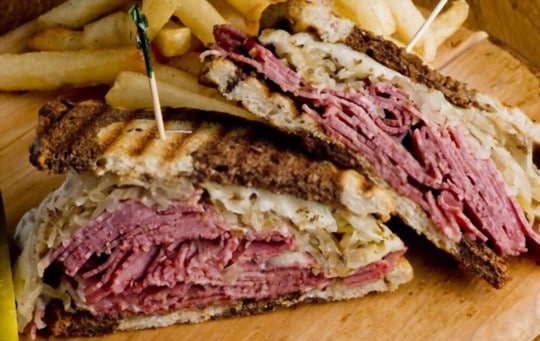 As explained above, corned beef was invented in the United States.

Since then, its popularity has spread worldwide, with large amounts consumed, particularly on St. Patrick’s Day in America and Ireland.

Corned beef is used in various dishes such as Corned Beef Hash or Irish Stew (Boxty).

It is also served cold during St.Patrick’s Day events. Corned beef is also a sandwich filling in the United States, Canada, Australia, and Ireland (colloquially referred to as “salt beef”).

However, its popularity has waned somewhat with the advent of processed deli meats in recent decades.

In conclusion, corned beef was invented in the United States, not Ireland. This American food is enjoyed on St. Patrick’s Day and used for different dishes.

You can find the best-corned beef in a deli or online. If you live in the Boston area, I would highly recommend going to City Landing.

Their corned beef is delicious, and their service is great.