Chamomile tea is a type of herbal tea that has been used for centuries to help people sleep.

Some people use chamomile for its calming properties, while others drink it for flavor or to help with digestion.

It is also a favorite during pregnancy, as it helps with nausea and anxiety.

In this blog post, we’ll cover what chamomile tea is, how to make it and what does chamomile tastes like.

What is Chamomile Tea? 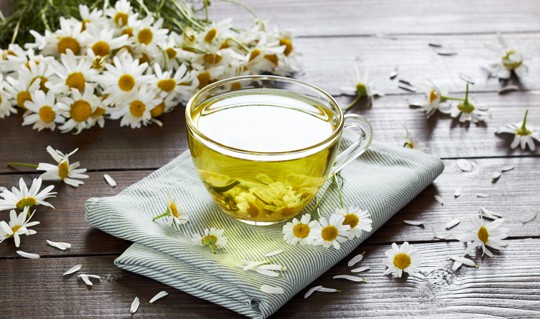 Chamomile tea is typically brewed from steeping the dried flowers of Chamomilla Recutita, a flowering plant in the daisy family.

Chamomile is a herbaceous perennial plant that has been cultivated for over two millennia and is commonly used in herbal teas, oils, ointments, and other products.

Its daisy-like apple scent identifies the herb, but it also has a delicate taste that is floral and subtly sweet.

Chamomile tea can be brewed with or without honey to provide sweetness, as desired by the drinker.

It may also be made with other species; Roman camomile (Anthemis nobilis) and chamomiles are often used interchangeably for this product.

Since ancient Egyptian times, tea has been consumed as an herbal remedy to calm anxiety and promote sleep.

In Victorian England, it was taken at bedtime to reduce stress before going to sleep.

It can be drunk hot or cold, but many people find that its flavor is more pronounced when served iced during warmer months.

There are many varieties available on the market today, including modern blends intended to soothe digestive distress or combat allergies, as well as the original variety for relaxation. 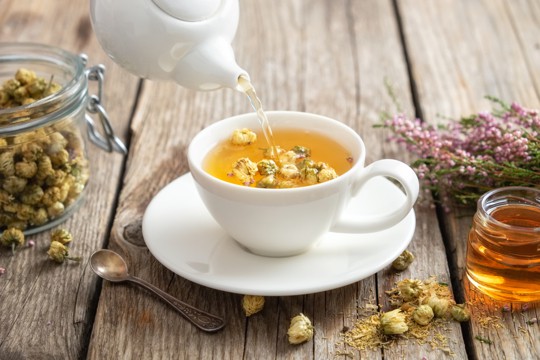 Chamomile tea is a wonderfully calming herbal drink that helps to soothe irritations and relax the body.

Used for centuries as an ingredient in medicines, chamomile effectively treats everything from stomach ulcers and gas to anxiety and depression.

It contains powerful antioxidants called flavonoids with anti-inflammatory properties that can reduce pain caused by arthritis or gout.

The main benefits of drinking chamomile tea are that it helps you sleep better, improves digestion, enhances the immune system, and promotes relaxation for overall improved health.

Chamomile’s anti-inflammatory properties make it an ideal drink during a cold or flu when you want relief from aches and pains as well as congestion in your lungs.

Drinking chamomile after eating ensures that the stomach and intestines remain at ease while eliminating painful bowel movements.

A common use of chamomile tea is as an anxiety remedy.

For people with panic disorder or obsessive-compulsive disorder, its soothing qualities can help calm them down.

Is Chamomile Tea Safe During Pregnancy? 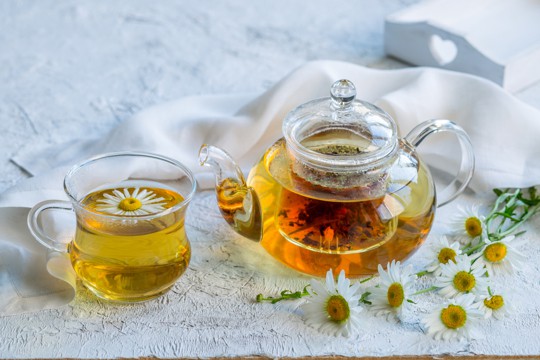 You may be wondering about the safety of chamomile tea during pregnancy.

There are many different varieties of chamomile plants, but they all have a chemical called coumarin which has been linked with liver toxicity.

The safety for pregnant women is not clear because some studies show that low amounts of compounds called coumarins may cause skin sensitivity upon exposure to sunlight.

However, there are no reports of adverse reactions to chamomile when taken as directed and used according to the instructions on the label.

In addition, one study found that taking chamomiles orally can protect against sunburns by boosting levels of protective antioxidant enzymes in skin cells.

The tea is considered safe and is often recommended as a natural remedy for colds, headaches, insomnia, anxiety, depression, and other nervous system disorders.

It’s always best to consult your doctor if you’re unsure about whether certain foods or supplements should be avoided during pregnancy so he. 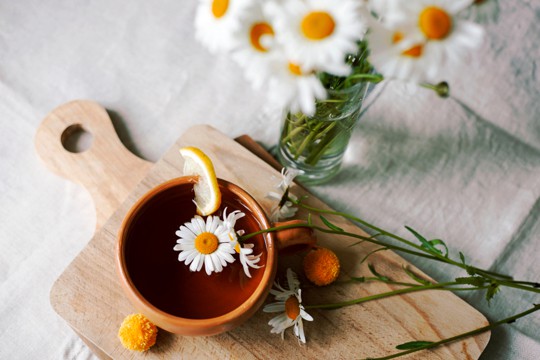 Chamomile is among the most well-known flowers in all of Europe.

The chamomile plant originated from a flower that grew on Mount Atlas, but it was brought to many other European countries by farmers and merchants.

The tea is made from dried flowers of chamomile picked when they’re in full bloom to ensure their fullest flavor.

The aroma of Chamomile Tea may be best described as a pleasant smell with a hint of apple. 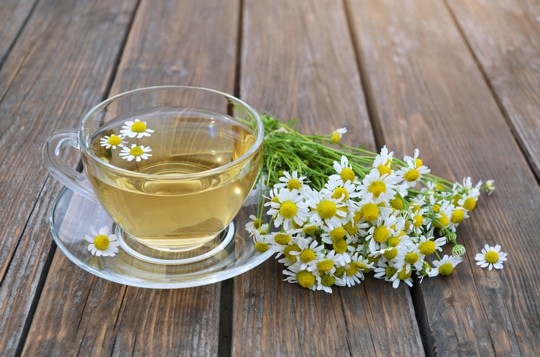 Chamomile tea is made from the dried flowers of chamomile, which has a sweet and herbal taste.

Chamomile has been popular throughout history as an herbal remedy because its soothing effects are just what people need to wind down after a long day.

The silky mouthfeel gives way to floral flavor in every sip, but don’t worry – this herb’s taste won’t overpower yours with bitterness or acidity; Chamomille remains delicately sweet naturally until the last drop from teacup goes dry on chapped lips.

This means that anyone who may not like more complex flavors will likely find this appealing because it’s easy on the palette.

Many also describe the flavor as having a hint of apple in addition to notes such as honey-like sweetness and citrus zest.

The taste varies largely depending on how long you brew it for – steeping will give a stronger flavor, whereas boiling will result in something more delicate.

In terms of color, the liquid is often a light yellow.

A common way to brew it is in a teapot, with boiling water added and allowed to steep for at least five minutes.

You can also add milk or honey if you like your tea sweeter. 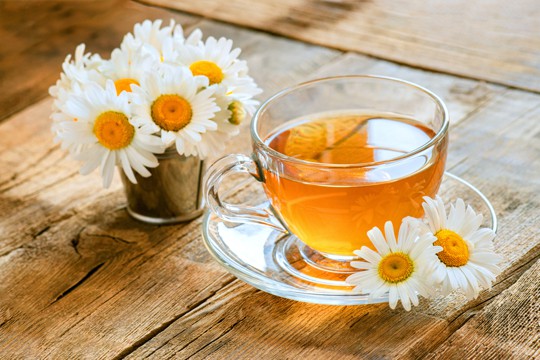 A pleasant infusion of honey, vanilla, and chamomile.

The scent is pure and sweet, with a hint of earthiness.

Chamomile flowers may have been the first plants domesticated by humans for their medicinal properties – they are naturally caffeine-free.

This blend will envelop you in comfort while keeping your sleep cycle regular.

The flavor is sweet and creamy, with a hint of vanilla and floral notes.

Naturally caffeine-free, it’s perfect for winding down before bed or to help you relax when feeling stressed out during the day.

A gentle antidepressant without the side effects – this herbal tea will make even your worst days seem better.

How to Make Chamomile Tea? 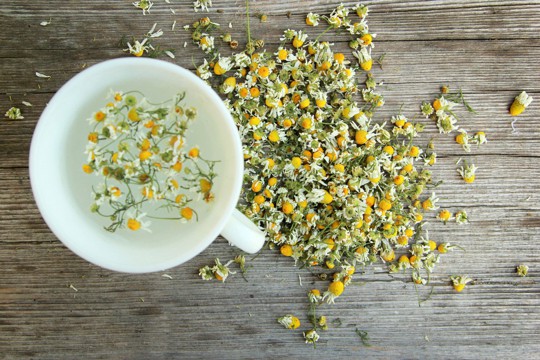 Chamomile flowers are dried out before they turned into powder or liquid form.

To make the tea, add boiling water directly to your chamomile flower and place a lid on top of the cup with some room underneath while waiting for a few minutes (or up 20-30 minutes).

Once the time is up, your tea will be made.

You can add a little bit of honey or sugar to sweeten the drink if desired.

You can also try making a cold version of this tea by adding ice cubes to your hot drink and leaving it out overnight, then draining it into an iced glass the next morning.

You will end up with much more liquid since you use warm/hot water rather than cool/cold water.

The flavor should be very similar, but many people prefer enjoying their chilled brew over time instead of a piping hot beverage that needs cooling fast due to its initial temperature.

Where to Buy Chamomile Tea? 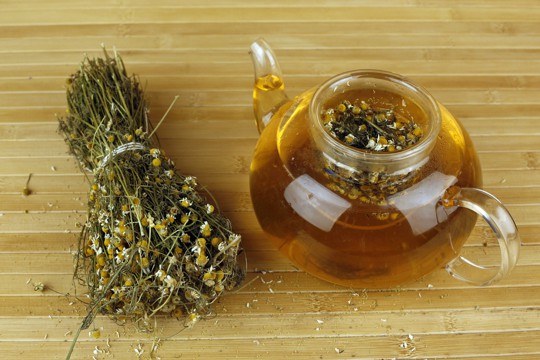 It is a question we get asked frequently.

You might be able to find chamomile in some gourmet stores like Whole Foods or Trader Joe’s- but these are not places where you will have a wide selection of loose leaf teas and herbs.

You may be able to find it with the other herbal products on the shelf- otherwise, ask an employee if they could look for you.

You may be able to find chamomile at some grocery stores, too; it’s worth checking out your local market.

If no specialty shop near you sells loose leaf tea (or fresh herbs), then check out online retailers such as Mountain Rose Herbs or Adagio Tea Company; their shipping rates are reasonable, and it won’t break your budget when buying Chamomile Tea online.

We also recommend looking into shopping on Amazon- they have an amazing selection of herbal teas from all over the world.

In conclusion, chamomile tea is a popular herbal tea.

The taste of chamomile tea is sweet and flowery, making it a popular option for those who enjoy drinking herbal teas.

The flavor can be described as light with little depth or complexity but still retains the qualities of an herbaceous tea that many love due to its freshness.

This can make some feel refreshed after enjoying a cup of this tea.