Bamboo is a type of woody grass that can grow up to 100 feet high.

Bamboo has been used for centuries in construction, furniture, and crafts.

It is also what pandas eat.

Bamboo has a variety of different tastes, depending on what type you are eating.

Overall, the texture and flavor can be likened to that of cooked vegetables.

What are Bamboo Shoots? 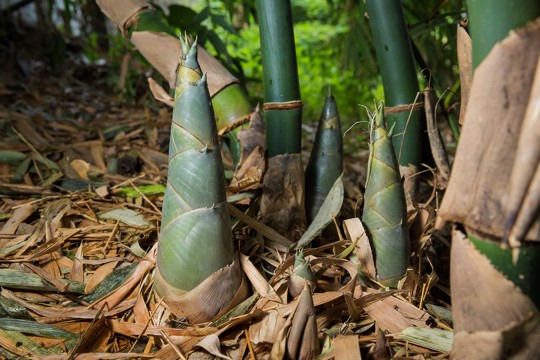 Bamboo is a woody perennial in the grass family Poaceae, subfamily Bambusoideae.

In bamboo plants, there are three parts: roots, stalks (or stems), and leaves.

The shoots or new growth emerges from ground level to form what we call culms, which eventually grow into mature canes reaching heights of 20-30 ft/ six meters.

Bamboo shoots refer to a young culm with unbranched internodes that have not reached their maximum height or diameter when harvested.

Usually about one-half inch (13 mm) long but can be even shorter than half an inch up to four inches (102mm).

Bamboo shoots must be boiled or steamed to remove the bitterness in them.

It’s been noted that bamboo shoots have higher protein levels than most green vegetables, making them an excellent choice when you want more plant matter into your diet.

Bamboo shoots are a staple in the diet of many cultures.

In Asia, they can be found served raw or cooked and pickled as an appetizer.

It is also often used for soups and stir-fries.

When steamed or boiled, the bamboo shoot has a crisp texture that makes them ideal for salads or adding to sandwiches. 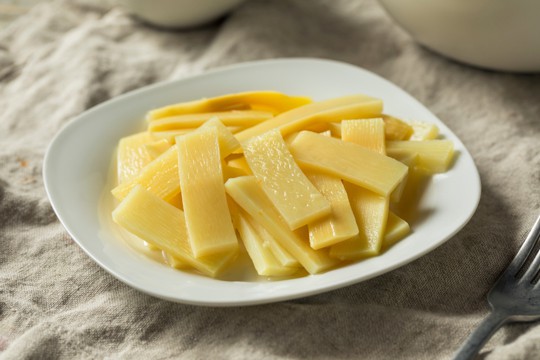 Bamboo shoots are an excellent source of vitamins and minerals.

They contain high levels of Vitamins A, B, and C.

They are also a great source of calcium, iron, and potassium.

Bamboo shoots contain high levels of antioxidants, too, which means that they have anti-aging properties.

The phytonutrients present in bamboo shoots help fight against free radicals, so it is an excellent food for fighting the signs of aging, such as wrinkles or sagging skin caused by sun damage.

There are many other benefits to eating bamboo shoots, including their role in improving digestion.

They promote good bacteria growth within your gut and improve bowel movements due to their fiber content.

Their diuretic effect can be beneficial if you suffer from bloating or water retention on top of being delicious.

To get all these benefits, you need to cook with a bamboo shoot.

You can fry or grill them, steam or boil them, and they taste great when added into stir-fries, soups, and salads. 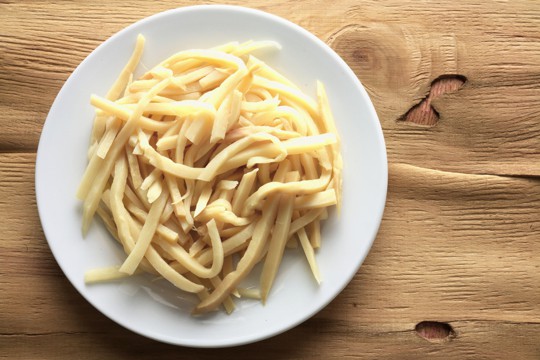 Bamboo shoots are eaten in many parts of the world, including China and Japan.

Bamboo shoots are a delicious and nutritious ingredient that has been described as “nutty”.

Bamboo is known for having an earthy taste with hints of nuttiness.

The subtle flavor will bring out the natural flavors in your dish by adding texture, crunch, and sweetness to any meal.

It can be compared with the taste of water chestnuts or artichokes.

The taste of bamboo is best described as sweet and refreshing.

There’s also a slightly tangy flavor to it, but very subtle.

Bamboo is a great substitute for water chestnuts in recipes that require something crunchy.

Bamboos are agreeable and easy to pair with other flavors, but it’s the texture people love most about this vegetable – firm yet still pleasantly crisp.

The flavor of bamboo shoots works best with dishes that have strong flavors and spices, such as spicy chili or stir-fry noodles.

Bamboo shoots can also be used in soups to add texture while still providing a mellow taste.

How to Cook Bamboo Shoots? 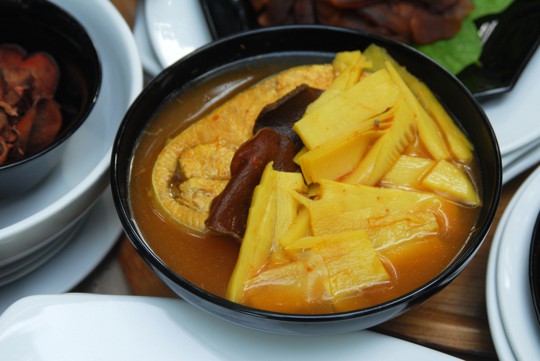 You can enjoy this delicious product in many ways, so it is well worth adding a few tips on preparing your fresh supplies in the kitchen.

Firstly, look out for shoots at their peak ripeness which means firm but tender as these will be more flavourful than softer ones.

Then peel off any leaves from around the base before snapping off each shoot.

Finally, prepare according to your chosen recipe.

A few popular dishes are stir-fried with garlic and soy sauce or steamed in a light broth which is also delicious cold.

It’s best to cook them quickly to retain their taste and nutrients, so be sure not to overcook.

If you want a more traditional approach, they also work well in our tried-and-tested bamboo shoot recipe for braised pork hock.

So why stop at one way of cooking when there are plenty out there? Now that’s what we call versatile.

Bamboo shoots can work as a buffer against saltiness if you use them in dishes with strong flavors like black bean sauce or ground beef.

You can even cook it to be part of the protein itself.

Try slicing it thinly before stir-frying with eggs and oyster sauce for deliciously tender “bok choy”.

Where to Buy Bamboo Shoots? 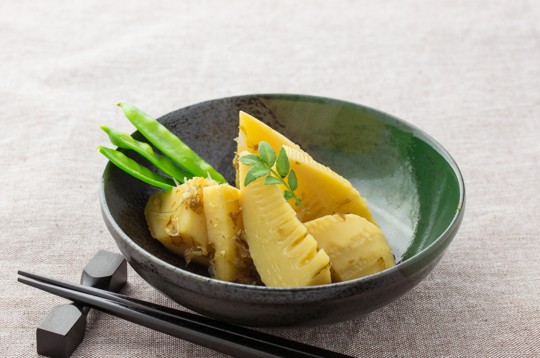 In the US, one company that specializes in selling bamboo shoots is called Native Forest.

They offer organic and conventionally grown varieties of fresh or canned shoots.

In addition to carrying a variety of bamboo shoots, Native Forest also offers bamboo shoots that have been canned in water or brine.

Native Forest does not offer jarred bamboo shoots; however, they do make various sauces and marinades for use with the fresh varieties.

Another company that sells both fresh and canned shrimp is T&A Products Incorporated.

They sell their products to grocery stores nationwide and online retailers like Amazon Fresh and Vitacost.

The canned versions are packed in either water or brine, while the jars contain minced, whole, sliced, diced, or julienne forms of caned product.

For those looking to purchase small quantities of the product without having to deal with ordering it wholesale from abroad, the best bet is to head over to your local Asian grocery store.

For those who would rather order online, they are in luck.

There are a variety of websites that offer bamboo shoots for sale.

Furthermore, these websites will ship from foreign countries.

Be mindful of the potential added shipping costs and delay in delivery as a result.

How to Store Bamboo Shoots? 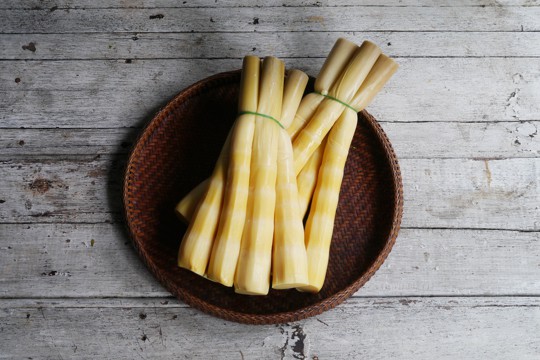 Bamboo shoots are perennial, which means that they grow back each year.

It also means they have to be stored for the winter months to survive.

Bamboo shoots should stand up and not lie down when stored for this long period – otherwise, they will rot.

Here are some tips for storing bamboo shoots for the winter:

In conclusion, bamboo shoots can be eaten all year round and can either be cooked with other vegetables or alone.

Bamboo shoots are a great filling food that is easy to find in most Asian grocery stores.

In general, it tastes sweet but can also taste sour, depending on how you cook it.

Go ahead and try it.